There are many balloon brands that claim their products are eco-friendly. But do biodegradable balloons really exist? We’re afraid that the answer may disappoint you.

However, the explanation is so complicated that we can’t boil down to a few sentences. And more importantly, what are the alternatives? Let’s find out right now.

Why are balloons bad for the environment?

If you follow the news recently, you must already know that marine and aquatic pollution has become one of the biggest problems for wildlife. Some researchers have even predicted that by 2050 if we continue to pollute the environment with plastic at the current rate, there will be more plastic than fish in the ocean.

And this amount of plastics we throw out every year comes from every type of product: straws, toys, nylon bags, and other single-use items, including balloons, all of which can take decades and even centuries to break down.

The plastic debris can spread in a large area

Balloons go up. But they also must go down. With the help of the winds, they can spread far from the original point and enter the environment. And when they go back into the ground, balloons become a source of ugly little. And those models that are marketed as “biodegradable balloons” are not an exception.

Once airborne, balloons can travel for a long distance before becoming deflated. They can end up in rivers and join the oceans.

There was one experiment that was designed to study wind direction by using a balloon. And you know what? Researchers have found it 1300 miles from the release site later! Now let’s imagine for a moment. All those balloons we release at every graduation ceremony, where will it end up?

They can lead to intestinal problems and suffocation

Wildlife is probably the biggest victim of balloons and their serious threats.

When balloons pop or become deflated, animals can easily mistake them for safe food. Turtles, whales, dolphins, and other marine species are the most well-known animals that are killed or hurt by balloons. But the list goes on with other terrestrial animals who suffer no less from this problem, including birds, tortoises, sheep, dogs, and cows.

When an animal eats a balloon, the digestive tract may get blocked, preventing the body from taking any nutrients. As a result, the animal starves slowly to death.

Scientists have warned us many times that balloons are among the top threats for birds. With other plastic debris that birds can accidentally consume, they can lead to a lot of deaths. A fifth of seabirds that eat balloon fragments may die from suffocation, as a study has shown.

Balloons can cause entanglements

The horrible issues from balloons don’t stop with just intestinal problems or suffocations. The ribbons and strings coming with them are also a dangerous threat.

These ribbons and strings can ensnare animals and restrict their movement, reducing the ability to feed themselves. And on top of starvation, entanglements are also a well-known culprit of drowning, amputations, and infections.

Helium use in balloons is not sustainable

As balloons filled with air don’t float, most balloons nowadays tend to use helium as the filling gas, especially when people need them for release events. The main reason is how light helium when compared to other types of gas.

As it’s less dense than air, or atmospheric gas, balloons filled with helium can float upwards. While each liter of air has a weight of about one gram, this amount of helium weighs just about 0.179 grams.

An easy-to-see issue with balloons floating freely in the sky is when they become entangled in power lines and other parts of the transmission system. But sustainability is another problem that most might not think of when it comes to helium used in balloons.

There is an ironic fact about this gas: even though helium is the second most abundant element in the whole universe, we can rarely find it here on Earth.

We still have no chemical process to manufacture it, and the source of helium we have comes from the slow radioactive decay occurring in rocks. Extracting helium from air usually costs more than 10000 times than doing it from natural gas or rocks.

But on the other hand, this gas is very important for us, which we can use in ventilators, LCDs, cryogenics, nuclear reactors, welding, fiber optics, and MRI scanners. By wasting too much helium in balloon releases, we are depleting this invaluable gas and making affordable helium for other more useful applications less possible.

Can we recycle balloons?

The short answer? No. They are not a recyclable product.

There are two types of material used for making balloons: latex and mylar. No matter what balloon companies say, we can’t practically recycle them, making both of them a bad choice for an environmentally friendly lifestyle.

While this might be the first time you heard of the term “mylar,” it’s the most common type of balloons, and we’re sure you’ve seen one around.

They are made from polyethylene or synthetic nylon with a metallic coating. You can easily find and buy these foil balloons at pharmacy stores and party stores, where they are already filled up with helium or normal air.

Due to the presence of synthetic materials, mylar balloons are totally not biodegradable, making them one of the less eco-friendly products we often use.

This question is a tricky one. One of the most marketing features latex balloon companies have constantly boasted is that they are biodegradable and eco-friendly, as long as we don’t attach them with any ribbons.

However, this myth has been debunked by many scientists. This is just a gimmick created and advertised to make people buy latex balloons with a false hope that they are protecting the environment while celebrating meaningful life events.

While pure natural latex is safe and biodegradable, in the processing of making balloons, it must go through a lot of chemical treatments that make it no longer eco-friendly. For example, latex is often treated with zinc oxide, ammonia, and TMTD (Tetramethylthiuram Disulfide). On top of that, manufacturers also add some plasticizers into balloons after that.

So no, latex balloons are still not biodegradable like their ads often tell us.

The part above has made it pretty clear that balloons, no matter how they’re made, are not safe for the environment. But luckily for us, there are numerous biodegradable balloon alternatives that you can select to give a celebration or event a sense of joy. 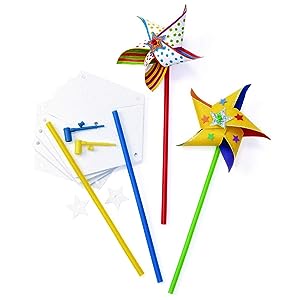 Pinwheels are just a small version of handheld windmills that we can make from biodegradable paper. You can even pin these pinwheels into paper straws to make a completely eco-friendly toy.

You can hold them out so that the wind can make them spin and simply decorate your event space with them in the same way you do with balloons.

Look into garden spinners if you want more durable pinwheels to put in your backyard.

The DIY Pinwheel Kit from Colorations is our recommendation if you prefer to make pinwheels from scratch. Even though they’re intended for kids to improve their crafting skills, adults can use it for their events with no issue.

The pinwheel faces are made from cardstock, while the kit also provides straws and connectors. The foam is latex-free, and the final pinwheels are safe and non-toxic for children. 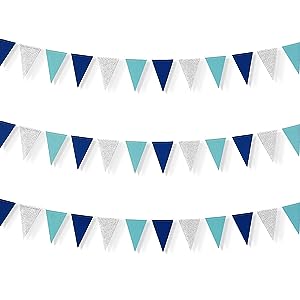 If you’re planning to host a big event such as a retirement party, a birthday party, or congratulatory party, banners and bunting are a better way to decorate it than a few balloons. They can give not only a sense of importance but also a focal point to your party – something that balloons can’t really create.

Pinkblume has made a set of simple yet elegant bunting banners that are made from glitter paper and cardboard. Each kit includes three silver and blue sets that you can hang across your walls, windows, or trees. 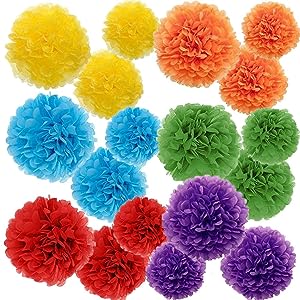 Paper has always been a great alternative to plastic in many decorative products, including pompoms. Paper even makes these pom poms look better than typical balloons at a party.

As manufacturers usually make tissue paper from recycled paper, they are biodegradable as long as there are no metal specks attached to them.

You can give these Thechot pom poms a try as decorations of your next event: baby showers, housewarming parties, or birthday parties.

They are 100% made from unscented tissue paper and come in 6 colors: yellow, orange, green, purple, blue, and red. When putting together, these pompoms complement each other like a rainbow. 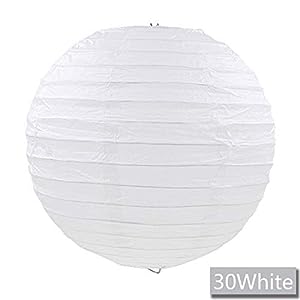 This set of lanterns from KirinStores provides you with 16 colorful lanterns that you can hang up in your event. Inside each lantern, there is enough space to put a mini LED light if you wish.

They are made from sturdy tissue paper with metal supports. The best part about these lanterns is that you can fold and store to use it multiple times. Don’t worry much about the assembly as KirinStores already includes detailed instruction in the package.

There is a wide range of colors you can select from, making them a perfect choice for multiple occasions, from the Chinese New year, bridal shower, birthday, weddings, baby shower, and other theme parties and celebrations. 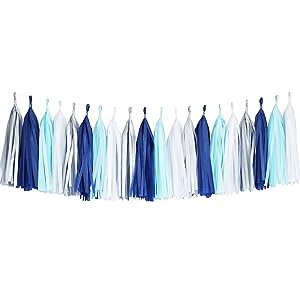 Tassels share the same idea with pompoms, which you can use to hang across your party to put some living and celebrating atmosphere into it.

Each package from Party N Beyond includes 20 tassels in three colors, from blue navy, white, and silver to a unicorn pastel combo. Each 14-inch tassel like that is made from 4 players of tissue paper – a perfect biodegradable material. Party N Beyond even provides a rope in the box for hanging. 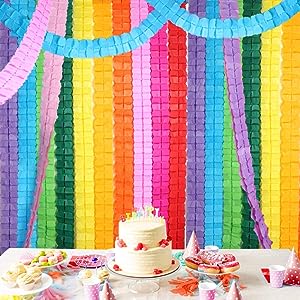 When you’re planning a celebratory event or a surprise party, paper streamers should be your first choice to replace normal balloons. You can not only use them as a part of your colorful decoration but also attach them to your ceiling, just like balloons.

There are many eco-friendly paper streamers that you can store and use multiple times, like this product from RUBFAC.

These streamers have a fresh and bright look. And even though just made from tissue paper, they will not break easily, thanks to the excellent workmanship.

You can use it in many spaces: just pull the rope on both sides and hang it on the balcony or ceiling for your nursery decorations for birthday parties. 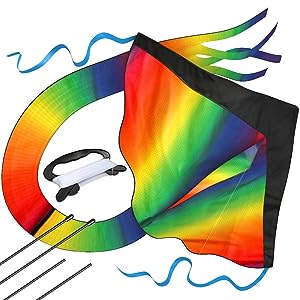 When you need an alternative option for your kids in an outdoor event where they can float it in the air, consider a kite. Flying a kite is as fun as playing with balloons, and your kids can keep their kite afterward!

This activity can also be used to teach your kids many useful skills. It’s not just about launching and maneuvering a kite but also about developing strength, thinking, coordination, and of course, protecting the Earth.

This aGreatLife kite is a great place to start. It’s made entirely from non-toxic materials and designed for kids in mind with easy to handle features. 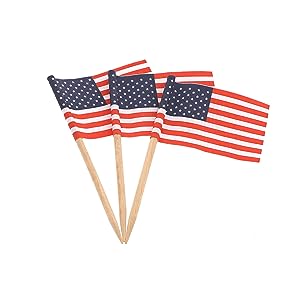 If your next event is a Thanksgiving dinner, placing some mini flags instead of balloons is a good alternative.

These Royal American flag picks can be put into many dishes, from meatballs to hamburgers. The picks are made from wood that you can piece into foods without the risk of shredding or splintering.

The flags are also biodegradable that you can throw out with the food waste, making it a convenient and eco-friendly choice for all kitchens.

As you can see, while we might think balloons are a tradition that has no reason to avoid, it can, in fact, pose a serious threat to the environment, especially marine wildlife.

Once you’ve realized that and want to strive for a change, there are numerous biodegradable balloon alternatives that can make their way perfectly into your parties or celebrations.